The Values Americans Live By: a piece of theater is a reaction to and is inspired by L. Robert Kohls 1984 work of cultural anthropology, The Values Americans Live By, which was originally intended as an introduction to American culture for foreign visitors. LECs piece of theater hands the text to the audience in the guise of a college syllabus and offers them access to some of the things that the creators found missing from the academic document: poetry, confusion, yearning. Audience and actors together traverse the familiar and the foreign through a distinctly American lens. Space travel, Frank Sinatra, the open market, self-help gurus, the bureaucracy of academia: participants find themselves morphing from audience members into students, consumers, self-improvement devotees, and back again. The LEC takes as its task the exploration of this document and its implications, exploring a place between traditional theater and educational exchange, locating in each the impulse to explore, to dominate, to imprint the other with our understanding, our yearning and our interpretation.

An initial theatrical interpretation of this text was commissioned by Sri Parnab Mukherjee for The Delhi Alternative Theater Festival, New Delhi, India, February 2004. This embryonic improvised Solo for Clown by Aaron Kahn performed at Auroville, I.P. College/Delhi University, and at Podaitk in Calcutta, where The Telegraph dubbed the piece Theater at its most innovative. The first three-actor version, co-re-tooled by Michael Uppendahl and featuring Aaron Kahn, Colin Golden and Olivia Rosewood, was presented in May 2004 by The Namaste Theater Company at Tim Robbins Actors Gang Theater in Los Angeles.

The last version was collectively created by LEC Co-Artistic Directors Aaron Kahn and Ira S. Murfin with Associate Artist Barbara Whitney and Guest Artist Colin Golden. It was developed in part during a weeklong residency at Cazenovia College, Cazenovia, NY and premiered there in October 2004, with Aaron Kahn, Barbara Whitney and Colin Golden performing. That production toured to The Carnegie Center for Visual + Performing Arts, Covington, KY; University of Southern California, Los Angeles; Delhi, Calcutta and Auroville, India. The LEC was also honored to be the first occidental theater company invited to perform at The Bangkok Theater Festival, Thailand, in November 2004.

The Values Americans Live By: a Piece of Theater was further developed and remounted with a Chicago cast for The 2005 Chicago Directors Festival at The Bailiwick Repertory Theater and for a guest performance/workshop at The Chicago Academy for the Arts. The piece was performed with a mixture of the original and Chicago casts at the 5th Annual Arizona Spoken Word Festival, Arcosanti, AZ and at The 11th Annual Pedagogy and Theater of the Oppressed Conference, Los Angeles. The last performance of VALB took place at The Cincinnati Playhouse in The Park as part of the 2007 alterACTIVE series.

VALB had long been on our list of possible projects but only began, in earnest, once Parnab Mukherjee of Calcutta commissioned the piece for his festival in 2004. Since then, we have presented myriad versions of VALB in six U.S. states, northern, eastern and south India, and as the first invited American company to The Bangkok Theater Festival in Thailand.
The exchange this piece facilitated when presented abroad has been an enriching, enlightening, and occasionally entertaining experience. VALB has paved the way for more workshops and residencies than any previous LEC project. Workshops and residencies took place in three Indian cities, Bangkok, The Chicago Academy for The Arts, and Cazenovia College, where one student said it was “better than real theater.”
Now, armed with over 25 hours of digital video footage from our Asian tour of 2004, we are working on our first ever film project: The Values Americans Live By: a piece of film. This short source text continues to generate creative projects more than a decade after we discovered it. 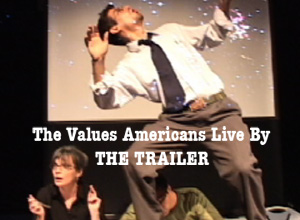 The Values Americans Live By
by L. Robert Kohls

© 2008 The Laboratory for Enthusiastic Collaboration   All rights reserved